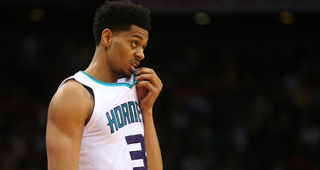 Jeremy Lamb was traded by the Oklahoma City Thunder to the Charlotte Hornets after three disappointing seasons in which he was given limited opportunities.

Lamb has been given more minutes with the Hornets.

“I just wanted an opportunity," said Lamb. "I had some OK moments there (Oklahoma City), I just wasn’t able to find my niche. So I really wanted to just find a way to get an opportunity, and I was able to be put in that position.”

Lamb was asked if he's had an improved relationship with Steve Clifford as opposed to Scott Brooks.

“I’m in the rotation more so I talk to coach Clifford more. When I was in OKC, I was a rookie, I was in the D-League a lot, and then I wasn’t as involved, so I didn’t talk to coach Scotty as much. But they’re both great guys. I just didn’t have an opportunity there. They’re both good coaches and they both have their style, so it would be hard to compare.”

Lamb was asked if he requested a trade from the Thunder.