Brandon Jennings Hopes To Remain With Pistons Beyond Deadline 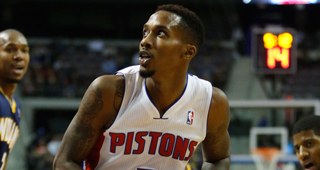 Brandon Jennings has been the subject of trade rumors ever since returning from his Achilles injury.

Jennings was asked if he thinks he'll finish the season with the Detroit Pistons after recording 17 points and six assists in 18 minutes on Monday.

The New York Knicks have been the team most frequently mentioned as a possible destination for Jennings.

"I can't really get away from it because it's all on my Twitter feed every time I tweet something," Jennings said. "But it's rumors. It's something that I'm not worried about. I just want to play basketball and I'm just blessed to be healthy again."

Jennings will be a free agent in the offseason.