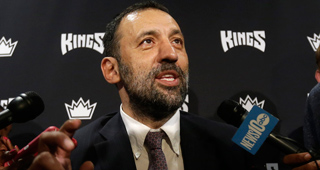 Vlade Divac told the Los Angeles Lakers he planned on retiring when they traded him to the Charlotte Hornets in 1996 for Kobe Bryant.

Divac was scheduled to make $4.7 million during the 96-97 season, so trading him gave the Lakers the chance to acquire Bryant and clearing cap space to sign Shaquille O'Neal.

"That was the best deal in NBA history," Divac told Yahoo Sports. "You got Vlade there in Charlotte and then you were able to sign Shaq because you cleared the salary cap and you got Kobe."

Divac was stunned when informed of the trade.

"It felt like someone from behind hit me with a hammer," Divac told Yahoo Sports. "It was the first time in my career that something happened in a way I didn't plan. I was devastated. I was thinking, 'I play basketball for fun.' My father said when I brought my first [basketball paycheck] back home, 'Who gave this to you? Are they crazy? Do they know you would play basketball even if they don't pay you?'

Within 10 days after the draft, Divac said he returned to Los Angeles ready to retire, yet he agreed to meet with West. After an "emotional meeting" with West, Divac changed his mind and agreed to the trade.

"Jerry called me and I flew back to L.A. and we had lunch," Divac said. "The trade happened [in principle], but I was holding it up. … It was a great conversation. He said, 'Why don't you go over there and explore and see if you like it or not?'

"Me and Jerry had a very good relationship. He was the guy who was waiting for me at the airport [after being drafted in 1989]. It was an emotional meeting for both of us. And I trust him so much. He is the best basketball mind in the world. When Jerry tells you something, you believe it."

Divac signed as a free agent with the Kings in 1998 with his family and a return to the West Coast in mind.