Tony Parker Expects To Extend Career Because Of Leonard, Aldridge 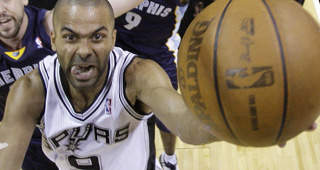 The way Kawhi Leonard has become one of the NBA's best players and the San Antonio Spurs' addition of LaMarcus Aldridge could extend the length of time Tony Parker wishes to continue playing.

Parker is 33, a few years younger than the Spurs' other long-time core players Tim Duncan and Manu Ginobili.

"It definitely helps that Kawhi and LaMarcus are here and playing great," Parker said. "That will help me to play longer, that’s for sure. If Kawhi and LaMarcus were not there, then maybe when Timmy and Manu was gone, maybe I’d play one or two (more years after that point) and retire.

"But now that they’re there, it makes me want to be there for the young guys. The way Timmy and Manu help all the young guys, I want to do the same thing too, you know? It’s such a great family and a great atmosphere, that it makes you want to stay."

Parker is signed with the Spurs through the summer of 2018.

"I don’t know," Parker said of the prospect of Duncan and Ginobili returning yet again. "To be honest with you, I don’t know. I have no idea. You don’t know, because it’s been three or four years like that."