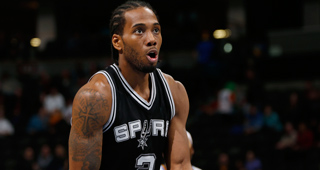 Part of the success of players like Kawhi Leonard and Draymond Green are their incredibly long wingspans.

Leonard has an 11.5 percent increase of his wingspan from his height, which is the highest amongst All-Stars. Leonard is 6'6 and has a 7'3 wingspan.

NBA players have a wingspan-to-height ratio is 1.06 to 1, according to a DraftExpress database of players who were drafted in the last three years, and they’re such a remarkable sample that a ratio of 1.1 to 1 is more common in the league than the ordinary 1 to 1.

Leonard and Green aren't too big to play on the perimeter but they're not too small to also play in the post.