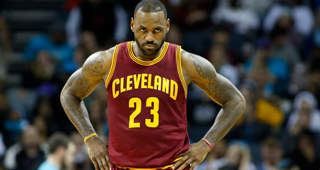 LeBron James feels much better physically this season than last when he missed 13 games, which included a two-week hiatus to rest.

"It's how my body was feeling," James said Wednesday. "Last year I was banged up. It's not a mindset, it's just reality. This year I feel 10 times better than I did last year. So that's the mindset."

James has only sat out one game so far this season.

James admitted making five straight trips to the Finals has started to catch up with him, but that he's not so worse for the wear that he would consider sitting out games.

"I guess I've played so much basketball, man, feeling great, those days are pretty much over," James said. "I don't know anybody that's played 13 years that you can say, 'Oh, I woke up and I feel great.' I feel great as far as life and getting an opportunity to wake up, but as far as me feeling like a 23-year-old, those days are passed."