Steve Kerr On Lakers' Loss: We Got What We Deserved 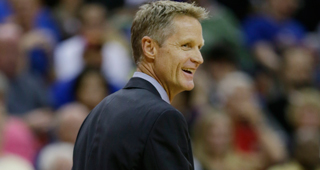 The Golden State Warriors lost 112-95 to the Los Angeles Lakers on national television.

The game between the Warriors (55-6) and Lakers (13-51) represented a matchup between teams with the most-lopsided winning percentages this late in any NBA season, according to the Elias Sports Bureau.

“Well, that was fun,” Steve Kerr said sarcastically to open his postgame news conference. “It’s actually pretty easy to explain. It’s the NBA, and if you’re not ready to play, anything can happen. We weren’t ready. …

“We got what we deserved.”

“It was a bad performance all the way through,” Stephen Curry said. “… It was just one of those days that you want to avoid at all costs.”