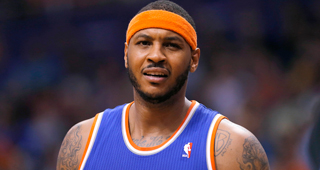 The no-trade clause given to Carmelo Anthony in 2014 restricts the options available to the New York Knicks.

"For everyone suggesting New York president Phil Jackson controls the future of the Knicks' franchise, just remember: when he included a no-trade clause in Carmelo Anthony's five-year, $124 million contract extension, Jackson ceded power to his franchise star," said Adrian Wojnarowski. "Which is why Melo will outlast Jackson at Madison Square Garden."

The Knicks aggressively pursued multiple free agents last offseason in hopes of becoming a playoff team again, but they are likely to end up in the lottery without even owning their draft pick.

"Jackson has done nothing to rid Madison Square Garden of its institutional survivors who care far more about preservation than fostering a positive winning culture.

"Jackson has every resource available to recruit an elite coach and so far refuses to go outside his stable of either failed or unproven candidates. And that's because this: in Phil Jackson's Knicks' world there's only one untouchable... the triangle offense."

"Anthony has more than welcomed burgeoning star Kristaps Porzingis into the team, a player who dropped to Jackson at No. 4 in the NBA draft.

"Melo is talking about recruiting free agents too this summer, which is perhaps a not too subtle message to Jackson and owner Jim Dolan: don't count on me waiving that no-trade clause. And if Anthony ever does, no one should expect he'd accept a deal to a mid-market franchise. He's a big city, big marquee day.

"These New York Knicks are Phil Jackson's creation and you have to wonder, as a top executive, does he have the acumen or work ethic to elevate them out of a rudderless state?"

Anthony has an early termination option available to him in 2018 and will become a free agent in 2019.