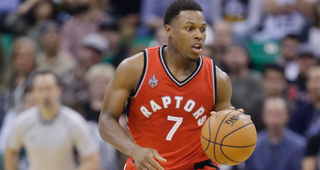 The Toronto Raptors are concerned with the lingering elbow injury of Kyle Lowry.

Lowry initially hurt his elbow when the Raptors were in London.

Lowry shot around 85% from the line over the first few months of the season, 78% in February, but has hit at just a 70% clip in March, including just 50% over the past three games since he hurt his elbow again.

Lowry got the elbow drained on Monday and they're not sure if rest will help it.