Stanley Johnson: No One Is Scared Of Playing Against Kevin Durant 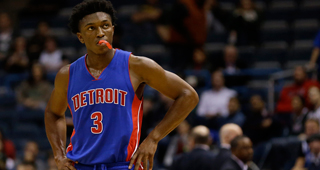 Stanley Johnson said comments from Kevin Durant were “uncalled for” and said Durant “disrespected” the franchise.

Durant criticized how Reggie Jackson enjoyed himself too much at the end of the Detroit Pistons' 88-82 win over the Oklahoma City Thunder.

“I wanted to play against Detroit, for sure, but you know, it's Detroit. Who cares about Detroit?” Durant said to explain his reasoning for skipping the game.

“If he wanted to have an impact on the game, he should have just played,” Johnson said after this morning’s shoot-around.

“No one is scared of playing against him on this side of town,” Johnson said. “Next year we have two games scheduled, and I know, for me, it's circled on my schedule from now on.”

“I don't think we're something to play with,” Johnson said. “I think we can be a playoff team and you gotta respect that. I think by saying that, he disrespected our whole team.”