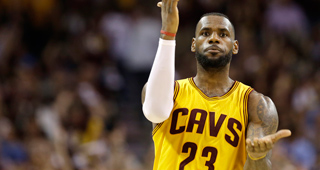 LeBron James was live-Tweeting watching Game 6 of the Western Conference Finals of 1997 between the Utah Jazz and Houston Rockets.

The game was airing on NBATV while the Golden State Warriors were playing the San Antonio Spurs on TNT.

James gave praise to Chris Paul, who has been one of his closest friends throughout his career.

"A lot of people compare @CP3 to Isiah Thomas but I think he's similar to Stockton. They get everyone involved throughout the game.... rarely shoot the ball, but when they do they rarely miss. Leaders and of course feisty as h-e double hockey sticks!"

The comments about Paul and Stockton could be interpreted as a subtweet to Kyrie Irving.