Paul Pierce Will Decide Upon Possible Retirement After Season 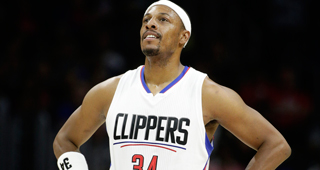 Paul Pierce had a postseason DNP-CD in the Los Angeles Clippers' Game 2 win. It was the first of his career as his minutes continue to decline.

Pierce averaged just 18.1 minutes per game this season, scoring 6.1 points and connecting on 36.3 percent of his shots.

Pierce hopes to influence the Clippers even as a mentor but he's frustrated not to be out there.

"It is what it is," Pierce told The Vertical, his voice trailing off. "It is what it is. It's difficult. As a competitor, you want to compete and help your team win. A close game – I've been in those situations lots of times. When you have competed at a high level, it's difficult."

This playoffs run with the Clippers could be the final games of Pierce's career.

"The last few years it has been an end-of-the-season decision," Pierce told The Vertical. "I'll make that decision after this season, too."

Few within the Clippers' organization would be surprised if Pierce decides to retire.