Jonas Valanciunas Ruled Out For Game 1 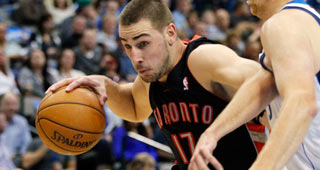 Jonas Valanciunas has been ruled out of Game 1 of the Eastern Conference Finals as he continues to recover from a sprained right ankle.

"He's going to get treatment day to day," Dwane Casey said during a conference call on Monday. "I don't foresee it but I'm not committing to it. Just going to see how his body reacts and comes through rehab. It's going to be very difficult for Game 2. But to cancel him out for the entire series, I don't know."

Bismack Biyombo has entered the starting lineup at center.