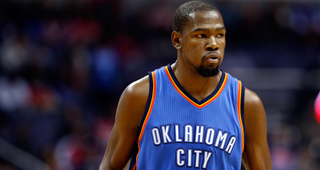 Kevin Durant returned from his multiple foot surgeries with a changed outlook. Russell Westbrook had emerged as an MVP candidate with Durant sidelined.

“I had to think the game differently,” Durant says. “How can I still be me without taking away from him? That was my challenge. I was used to having the ball in my hands all the time and scoring 35 points. Now we have all these other people—Russ, Enes (Kanter), Dion (Waiters), Serge (Ibaka)—and we’re a better team. So when I get shots, I have to be super-efficient. I can’t expend energy trying to dunk on people. I have to take every shot like it’s my last one, like it’s a game-winner.”

Durant averaged 28.2 points, 8.2 rebounds and 5.0 assists coming back from his injury. Durant also agreed to stagger his minutes with Westbrook.

“I was scared, I was worried,” Durant says. “Will I be back again? Will I be who I am? A year ago people were telling me my career might be over and I listened to that stuff, not because I’m sensitive but because I used it for fuel. I’ve always done that. When I was a sophomore in high school, I scored 28 points in my first varsity game, and I was feeling myself. They’re loving me right now! Then I got in the car afterward and my mom [Wanda] was like, ‘You didn’t do s---. You didn’t play well enough.’ I was like, O.K., cool. It was the same thing with the foot. The doubt feeds me.”