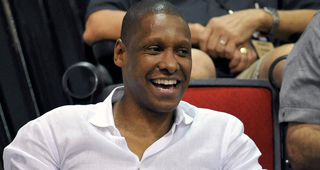 Masai Ujiri wants the Toronto Raptors to bring back DeMar DeRozan and Bismack Biyombo next season.

“I don’t know how possible that is, but honestly, it’s our jobs," said Ujiri. "We have to figure it out. That’s why we’re brought here to do this. Some of the things are more difficult than others. But to me, the approach is, our guys have said that they want to be here. That’s the first step, to build your culture and build your team, and you try to learn how to win and build winning. That attracts players. That makes players want to stay here. That’s the first step. And then, it’s kind of put on my table, and our guys in the front office, to figure it out. We’ll try to figure it out.”

Ujiri said the Raptors have just taken “baby steps” towards becoming a contender.

“Our number one goal is to bring DeMar back here. We feel great that he wants to come back to our organization. I spoke to him yesterday and his eyes were still red; you could tell, he said he felt empty the next day. Which was telling. Speaking to him and Kyle, they almost felt like we had a game to play still, and that game is not there. There’s that hunger, and you like that, and then now, it’s my part to figure it out. ”

Ujiri was asked about offering DeRozan a max contract.

“I think that question is for later. We’ll have those discussions. Our organization, I think, has showed that we want to win. Those are, I think, negotiations that we’ll have with DeMar and his agent, and we’ll see where it goes.”