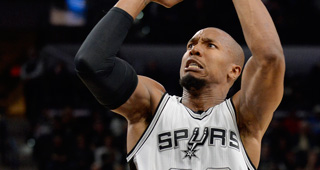 David West has declined his $1.5 million player option for the 16-17 season and will evaluate his playing future.

West signed a two-year deal with the Spurs last offseason after rejecting his $12.6 million option with the Indiana Pacers. West wanted to move on from the Pacers and pursue a title.

The Spurs could give West a more lucrative deal depending on their free-agent pursuits.

West was always expected to decline the second season of his contract.