DeMar DeRozan Not Planning On Meeting With Rival Teams 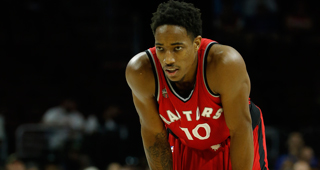 DeMar DeRozan doesn't plan on scheduling meetings with rival teams at the start of free agency as he focuses on re-signing with the Toronto Raptors.

"My mindset has always been Toronto," DeRozan told reporters the day after the Raptors were eliminated by the Cleveland Cavaliers. "I've always preached it. I was passionate about it when we were losing, when we were terrible. I said I was going to stick through this whole thing, and I want to be that guy who brings this organization to where it is now. I definitely don't want to switch that up after we win."

The Raptors can offer DeRozan a five-year maximum contract worth $153 million with the salary cap at a projected $94 million. Rival teams can offer him a four-year, $114 million deal.