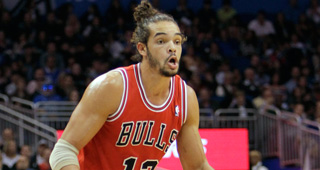 Noah is expected to part ways with the Chicago Bulls this offseason after joining them in the 2007 NBA Draft via a pick swap from the Eddy Curry trade.

The Knicks acquired Derrick Rose from the Bulls via trade before last week's draft and they've expressed interest in continuing as teammates.

Tim Bontemps of the Washington Post reports Noah is expected to sign with the Knicks soon after the beginning of free agency with a starting salary in the $18 million per year range.

Shams Charania of The Vertical reports Noah has set a meeting with Phil Jackson for shortly after midnight on July 1st.