GMs Pick Karl-Anthony Towns As Player To Build Franchise Around 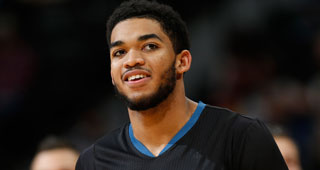 Karl-Anthony Towns had such an impressive rookie season that he's now the pick of 48.3 percent of general managers for who they would sign if they were starting a franchise from scratch.

Anthony Davis received 86.2 percent of the vote before last season but fell dramatically out of the top-3.