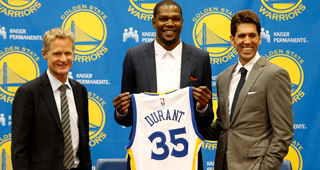 League sources say the primary fix that is expected is a mechanism to prevent another massive cap spike. The jump in the cap in 2016 allowed the Warriors to add Kevin Durant to a team that had already been to two straight Finals.

Another element expected to added is the ability for teams to sign their own players to multiyear extensions before they become free agents, which was eliminated in the 2011 labor deal.

There could also be tweaks to the "max" salary formula to make it more difficult to collect superstars.

“They’re going to go back and clear things up that enabled this to happen,” one general manager said.