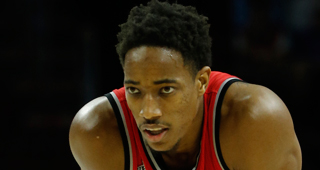 DeMar DeRozan re-signed with the Toronto Raptors on a five-year, $145 million deal and is now setting his sights on becoming the best player in franchise history.

"Without a doubt. No question," said DeRozan when posed with the question. "How many people get to say they hold one record for an organization, or were on the winningest team in Raptors history, or did this with one organization? All of those things last longer than your playing career. It took time for me to get out of the second round [of the playoffs] in Raptors history. And we did that [this year], and that’s something that is going to be there.

"If we don’t do it and someone else wins a championship, they are still going to revert back to the 2015-16 team as the best team until then. Ten, 15, 20 years from now, whatever it might be, those things last longer. It’s something you put your all into."

DeRozan chose to re-sign with the Raptors despite expected offers from the Lakers, Clippers and Heat.