76ers To Use Ben Simmons As Point Guard 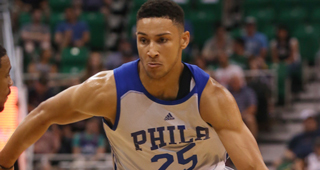 The Philadelphia 76ers plan on making Ben Simmons their point guard when he returns from injury.

“When he’s ready to go to the court, my intention is to give him the ball and let him be the point guard,” Brown said. “That’s the plan. That doesn’t just happen. It takes a little bit of time to introduce him.”

The 76ers will slide Jerryd Bayless off the ball but he would still defend opposing point guards.

Simmons suffered a Jones fracture in his right foot during the final day of training camp in September.

“It wouldn’t surprise me, if you fast-forwarded all this a few years where we may sort of declare him a point guard,”  Brown said last week on NBA.com’s Hang Time Podcast. “Sometimes in my aggressive wishes, dreams, I say why don’t you just give him the ball?"