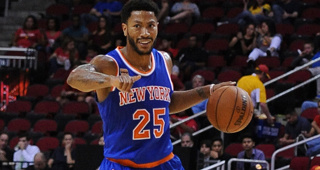 Jeff Hornacek admits he may have underestimated the impact of Derrick Rose as Brandon Jennings doesn't command the same attention of defenses.

“It sure looked like it. Brandon has the ability to drive in there too,” the coach said. “But I think Derrick’s finishes really draws guys into the lane. And then we’re able to kick out from that. Brandon will dribble around and throw it out to somebody. But I’m not sure other teams are as concerned with Brandon finishing at the basket as they are with Derrick.”

Rose has missed three out of the past five games with a back problem.

“(Rose) is obviously an important piece that we need and not having him out there is obviously not good for us,” Kristaps Porzingis said. “We want him to get healthy first and make sure he’s 100 percent then he’ll get back on the court.”