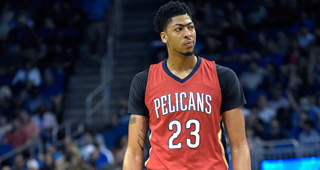 Anthony Davis has had to endure some criticism and the burden of responsibility as a franchise player as the New Orleans Pelicans have struggled to put a healthy team around him.

“It’s been a learning experience,” Davis told The Vertical. “And I learn from every experience. Any time something goes bad, I try to talk to people and just figure it out, see what I can do to help this team. There is nothing else to it. Try to go out here and be the leader and help this team as much as possible.”

“Obviously, you’re going to go to your best player. I don’t see OKC going away from Westbrook. So we’re not going to go away from him,” Gentry told The Vertical. “What he’s done, he wants to be the best player, so he continues to work and try to add things to his game. I think you look at his stats and the way he’s played, he’s more than withstood the burden of what is asked of him, and what we’ve got to do now is fill those other spots where other guys do the same thing.”