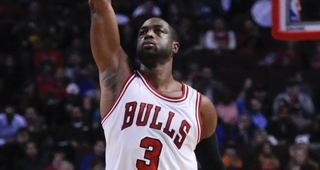 The Chicago Bulls have had struggles both on and off the court since their strong start to the season.

Jimmy Butler and Dwyane Wade were critical of the Bulls' younger players this week, which prompted a sharp response from Rajon Rondo on Instagram.

In their loss to the Atlanta Hawks this week that sparked criticism from Butler and Wade, the pair combined to score 73 points on 46 of the Bulls' 94 shooting possessions.