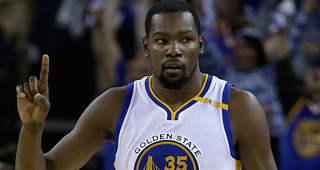 Kevin Durant is expected to become a free agent this offseason and his new max deal is projected to start at $36 million.

Since the Golden State Warriors don't have full Bird rights on Durant, they would have to use cap space to re-sign Durant.

Durant could instead re-sign with the Warriors with a starting salary of $31.8 million, which is a 20 percent increase from this season and $4 million less than his projected max. The lower salary allows the Warriors to sign Durant under his non-Bird rights and they could then go over the cap to retain Shaun Livingston and Andre Iguodala, who will also be free agents.

Durant was asked if that’s something he would consider.

“We’ll figure that out when the time comes,” Durant said.

“I don’t feel the need to go tell Shaun and Andre: ‘Yo, go take less money, money isn’t everything,’” Green said. “I don’t feel the need to say that, nor will I say that. You can’t tell what guy what money he should make or what’s important to him or his pocket. I don’t count anyone else’s pocket. Will we recruit them and want them back? Hell yeah. We’ll do everything we can to get them back. But I’m not going to tell them, ‘Hey, man, you should stay here for a little less money. You don’t need that money.’ That’s not me.”

Stephen Curry will also be a free agent but the Warriors have the luxury of his small cap hold and full Bird rights.