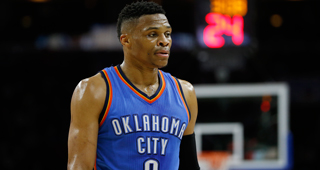 Sam Presti and the Oklahoma City Thunder are hopeful they will be able to sign Russell Westbrook to an extension this summer.

Under the NBA's new CBA, the Thunder can sign Westbrook to a five-year, $217 million supermax. Westbrook signed a three-year, $85 million extension with the Thunder last summer one month after Kevin Durant left the franchise for the Golden State Warriors.

"The rules are that you can't have that conversation until July 1, and you know, when that time comes, we'll sit down, we'll have conversations with him about what that opportunity presents," Presti said Monday at his end-of-season availability. "And you know, we're obviously hopeful that he remains really excited about being a part of this organization for the remainder of his career."

Westbrook has a player option on the final year of that contract that can allow him to be a free agent in 2018.

If Westbrook doesn't sign an extension this summer, Presti says he hasn't considered whether they would trade him.

"Let's not think so far ahead," Presti said. "Let's just see where the information takes us. I understand the question. I think the biggest thing is, we had that conversation with Russell last year, and you know, he was really clear, and it worked itself out. So before we get all the way down the road on what if, what if this happens, what if that happens: Again, that's one of those things where we're talking about a very complex question, a very complex situation with a lot of moving parts, and looking for, like, a simple answer to that."