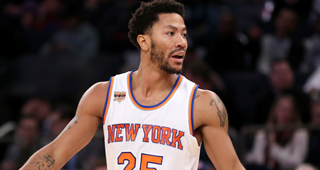 The New York Knicks never offered Derrick Rose even a contract at the veteran's minimum.

Rose signed with the Cleveland Cavaliers on a one-year, $2.1 million deal. Rose spent one season with the Knicks.

The Knicks drafted Frank Ntilikina in June as their point guard of the future.

“Did we miss something?,” Rose’s agent B.J. Armstrong asked The Post. “Is there something going [on] in New York we didn’t see? We all would agree they are on a different timeline than Derrick — a young team with great young talent there and trying to build something for the future. They’re not on the same timeline as players who are a little older and experienced.

“It doesn’t take a rocket scientist to figure out Derrick’s best basketball is right now. The Knicks aren’t ready to compete at that level right now. It could be three, four years.”

Rose is coming off his fourth surgery after playing 64 games with the Knicks.