Report: Dan Gilbert Was In Charge Of Cavs' Negotiations On Kyrie Irving Trade 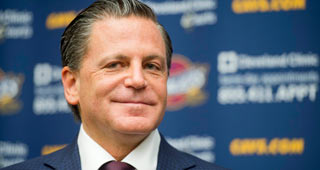 According to multiple sources that spoke with The Ringer, Dan Gilbert was in charge of the decision-making on the Cleveland Cavaliers' trade of Kyrie Irving to the Boston Celtics for Isaiah Thomas, Jae Crowder, Ante Zizic, Brooklyn's 2018 first round pick and Miami's 2020 second round pick.

The Cavaliers hired Koby Altman as general manager after Chauncey Billups decided not to take the job as president of basketball operations.

“A state of organizational chaos is Gilbert’s M.O.,” one executive told The Ringer. “Gilbert thinks he’s the protagonist in the story of the Cavaliers, when, in reality, he’s the antagonist.”

The Cavaliers sought extra assets from the Celtics following Thomas' physical. For the Cavaliers, however, the most coveted assets in the deal were Crowder and Brooklyn's pick.

According to a source, the Celtics priced Thomas' injury into the initial offer of the Nets' pick and Crowder.