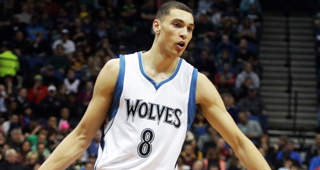 Zach LaVine has agreed upon a four-year, $35 million endorsement deal with Adidas.

LaVine is recovering from a torn ACL and hasn't played since his trade to the Chicago Bulls.

"I was looking for a partner that would grow with me as my career continues to unfold," LaVine said to ESPN. "Adidas convinced me that I have a chance to legitimately become a face of the brand."

The structure of LaVine's deal will reward him if he breaks out as an All-Star level player.

"It's a different contract than anything we've done recently," a brand source said.

The deal continues Adidas' shift in its strategy of signing NBA players.

LaVine said he was drawn to Adidas for its "brand presence already in Chicago."