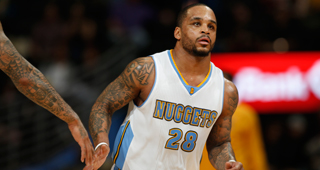 The Denver Nuggets had a deal to trade Jameer Nelson to a projected lottery team for a protected second round, but ultimately decided to release him. By waiving Nelson, they allowed him to choose his destination.

"You can't make decisions with your heart only," Connelly says, without confirming any Nelson deal. "But these are good guys. To view them as just assets -- that's not something we ascribe to. Guys we've had here will speak highly of how we've treated them."

"It was tough to see Jameer go," Malone says. "The players trusted him. I find value in veteran mentors. In our meetings, of course I brought up all the reasons it made sense to keep him. But you have to think big picture. It wasn't like I was kicking and screaming. By the end, we were all on board."

Nelson signed with the New Orleans Pelicans when he cleared waivers.