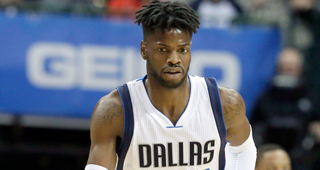 When Nerlens Noel fired Happy Walters in August and replaced him with Rich Paul, there were no new contract talks with the Dallas Mavericks.

Noel rejected a four-year deal with the Mavericks worth approximately $70 million.

Noel ultimately signed for the qualifying offer at $4.1 million for one season.

The Mavericks dropped Noel from the rotation and he underwent surgery on his left thumb.

"I have no idea," Noel told Bleacher Report when asked why he thinks he was removed from the rotation. "I know that I'm working hard and through it and making sure I'm going to always be ready when my number's called. Just make sure I'm on top of everything else, that I'm getting better, make sure I'm getting my extra work in so when that time comes to get back in the rotation, I'll be ready."

While Noel had an incident recently in which he grabbed a hot dog from the media room at halftime of a game, the Mavericks insist he's remained professional.

"He's been very professional, with the exception of the hot dog incident the other night, which we all had fun with," Carlisle told reporters last week. "That's over with now, and he realized that was a mistake. ... Our No. 1 thing as a team ... is just getting him 100 percent healthy."

"Nerlens has been great," Mark Cuban said. "He's been great in the locker room, a total professional."

"I most definitely don't regret anything. I'm not nervous because I know my abilities," Noel told Bleacher Report. "I know what I'm capable of. I know what I can get on the court any time, day or night, and do. It's simply getting the opportunity to show it."