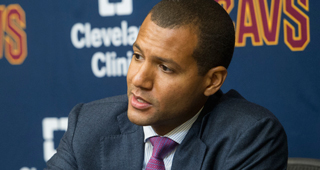 The Cleveland Cavaliers and Los Angeles Clippers held advanced trade discussions on DeAndre Jordan on deadline day. The two sides were unable to come to an agreement and the Cavaliers pivoted to a pair of deals involving the Los Angeles Lakers, Sacramento Kings and Utah Jazz.

"There were people in the league who thought there was traction towards the Cavs making a deal with the Clippers yesterday morning," said Brian Windhorst on The Lowe Post. "The reason people thought that was because there were other teams who were engaged in trade talks with pieces that would have spun off from that trade.

"So it got to the point where the Cavs and Clippers felt like they were close enough to some sort of agreement with each other that they could begin looking to bring in third teams and that's why I know about it.

"The Cavs and Clippers got some distance down the road with DeAndre Jordan. At a certain point, the Cavs elected not to make the deal with the Clippers and instead made the deal with the Lakers. Maybe that was for a hundred different reasons we'll never know. Maybe it was because in addition to negotiating with the Clippers, they had to negotiate with DeAndre Jordan, because he has a contract situation and if he was traded, he would have wanted to get an extension alongside of it.

"The Cavs were also talking with the Hornets. I just didn't see a deal path there unless they were willing to take on a huge sum of money, or willing to include the Brooklyn pick.

"They ended up making deals with four teams (at the deadline) and they were talking to at least six, and probably a lot more."