Warriors Detail Why They Have Unusually Harmonious Locker Room 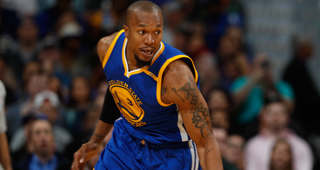 The Golden State Warriors have one of the most cohesive locker rooms in the NBA despite possessing four All-Stars.

“We’ve got good guys. Nobody’s tripping. A very ego-less group,” David West said. “In this environment, you can’t be mad. I’ve had to tell the young guys, ‘Y’all need to talk to some other people, ask guys what it’s like in other environments because this is not normal. You (expletives) better be thankful to God.’ (Expletive).For a coach to, even when you’re young, sort of give you the freedom to be yourself and develop your own identity — as opposed to saying, ‘This is who the (expletive) you gone be.’ I told that to all of them. Damian Jones, Pat (McCaw), whoever else the (expletive) in here who’s young. Those of us who’s been to other places — Andre, Shaun, myself — we know this isn’t normal. Even Nick Young. He’s been saying all year, ‘I’ve never seen nothing like this in my life.’ A lot of it is the environment we have here.”

“Nothing was given too early and we appreciate the moment,” Stephen Curry said. “Now we’ve got (Kevin Durant), we haven’t changed really. We’ve evolved as players and people on and off the court. But the purity of what we do when we’re out here on the floor is what everybody focuses on and wants to protect as much as possible. It takes a very special blend of individuals and personalities to sustain, for sure.”

West says the Warriors have only had one players-only meeting during his two seasons with the team and that came after they won the 2017 Finals and wanted to decide where to celebrate their title.

“Ego is the downfall of every human,” Kevin Durant said. “When you release that (expletive), you start asking more questions like, ‘How’d you do that move? I want to learn.’ You kind of humble yourself and you look at life as a student. Everybody wants to be a teacher before they learn the whole lesson. That’s your ego. I feel like everybody here kind of went through their lumps and learned the game and now they can give their input. That’s the proper way to do (expletive).”