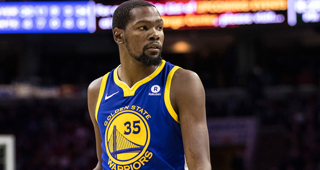 When the Warriors met with Kevin Durant in the Hamptons in 2016, their entire contingent of Joe Lacob, Kirk Lacob, Bob Myers, Steve Kerr, Stephen Curry, Draymond Green, Klay Thompson and Andre Iguodala all arrived together in the same minibus.

"I knew all four (Warriors players) were coming," said Durant. "But you never know, a guy might get in some traveling troubles, airplane troubles, something might’ve come up. So I knew they were coming, but I wasn’t expecting it. … I was just like, whatever happens, I want to talk to at least a couple guys and to Bob and Steve.

"Everybody was in the same car. Joe, Steve, Bob, Draymond, Klay, Steph, Andre, Kirk Lacob. I was like, man, this already looks like a family. I want to be a part of it. I was excited about that."

The Warriors initially talked about Durant's fit within their system before Durant went outside to talk with Curry, Green, Thompson and Iguodala.

"And then after a period of time, those five just went outside on their own and I think that’s probably when the deal was sealed. They left all the riff-raff inside and got down to business."

Durant wanted to know why the Warriors wanted him despite coming off a 73-win season.

"My first question was, you all just came off of a championship the year before and lost in Game 7, why do you want me on the team?" asked Durant.

The Warriors beat the Thunder in a seven-game series just a few weeks earlier.

"At that time in my career, I didn’t know how other people felt about my game. And I knew that I was pretty damn good and I knew I worked extremely hard, but I needed that validation from my peers and teams and GMs, people that are really into the game, to really help me feel good about myself and help me feel confident and let me know that what I was doing was working.

"So when they all came, and they all put stuff to the side to come to the meeting, I was like, man, this is amazing. Best team in the league, some of the best players, most accomplished players want me on their team and want what I do, what I bring to the table. It was pretty cool, you know what I’m saying?

"Because I’m looking at this whole basketball thing from a kid’s perspective. I’m still excited, I’m still learning. So to have that much love in the room for how I play basketball, that’s cool. They’ll get to know me as a person, I was confident with that. But the basketball side, I was, like, man it’s pretty damn cool that people enjoy the way I play and want me to play with them."

Durant had already known he wanted to join the Warriors and the meeting was about confirming it would be a good fit.

"So as soon as I sat down, had the first conversation, no small talk, straight to it, I’m like, this is where I need to go. And everything else was the cherry on top. I was already sold when they walked in."

Durant also talked about his thought process in letting down the people he was close to with the Thunder.

"I was just figuring out how I’m going to finally break it down to people that I’ve spent so much time with that this was the place I wanted to play. That was the hardest part," said Durant.

"That was my first meeting and the whole time I was like, I need to finish the process, but I know where I want to be. So I’ve just got to make sure that I make the right decision. Because I could’ve easily just said, 'Naw, I don’t want to disappoint nobody, I just might go back.'

"But in all actuality, I just wanted to play here."