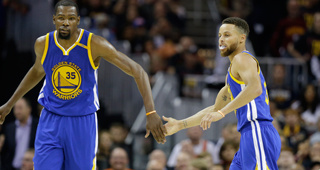 With Kevin Durant essentially having his mind made up that he wanted to join the Warriors even before his meeting with their entourage in the Hamptons in 2016, the most critical point was getting a sense of how Stephen Curry felt about it.

"I was hoping he asked it," said Rich Kleiman.

"It was all natural dialogue, so it wasn’t awkward. It was a natural, fluid conversation like two friends, two colleagues."

"I think we all knew going in that the biggest piece was going to be, what is Kevin going to ask Steph and what is Steph going to say?" said Kirk Lacob. "I think we all know what an unbelievable person Steph is and how ego-less he is. To be able to go and have a player ask him: Do you want me to come here? How do you feel about this? You are the reigning MVP.

"And for a guy to say, yeah, I want you to come here. I want to play together. I think we can work together and both be better because of it. We didn’t script that. That was him."

Curry was coming off back-to-back MVPs that offseason with Durant winning in 2014.

"I think it was Kevin wanting to hear from him, the one that probably stood to lose the most exposure or spotlight — how do you feel?" said Bob Myers. "I think if you know Steph, that’s never been his agenda. He didn’t join the league to be the MVP, he joined the league to try to win. Maybe that’s because he grew up in the NBA and was around his dad and realized the only thing that matters is winning. Klay the same way, grew up with a father who was in the spotlight.

"So I think Steph, without hesitation, said, 'of course, if you can help us win, let’s go.'

"I’m surprised people have such a hard time believing that. To me, it’s so obvious. That’s a testament to our culture, in a bad way, I think. That winning is the most important thing. That getting credit isn’t more important than winning. I’m always amazed that people would think someone would choose self-promotion or acclaim over winning as a team. It’s hard for me to understand. But certainly Steph’s not that way."

Curry was candid in his comments to Durant.

"I just knew he was going to ask that question. It was more so, we have a very dope chemistry on our team and he’s a guy, based on my experience playing against him and playing with him on Team USA stuff, that he would fit right in from a culture standpoint.

"And that it wasn’t really about pissing contests. At the end of the day, if you want to play for a great team and have fun playing basketball, this would be a great place for you."