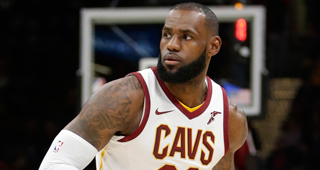 LeBron James has until the end of June 29th to exercise his opt-in for the 18-19 season and in the interiim, there have been reports of James communicating with Kawhi Leonard, Kevin Durant and Paul George.

"They have pretty much denied that any of that is happening.

James has been on vacation this week in the Caribbean.

"They are people that don't make a habit of lying," said Windhorst of James' camp.

"Clearly, LeBron is keeping a very close eye on the Lakers. This is my read on the situation: if he opts into his contract, that it pretty much closes the door on him going to the Lakers. It doesn't necessarily guarantee that he is staying with the Cavs, but I think it's a really good sign that he will.

"If he opts out of the contract, I don't necessarily think that it means he is leaving the Cavs, but I do think it bodes better for the Lakers if he does that.

"There are other teams involved; obviously Houston, Philadelphia etc. But I really think this is a Cleveland or L.A. decision.

"Philly has some interest, and I think Houston, if LeBron opts into his contract could get involved."

The possibility of James and Leonard teaming up with the Lakers does not appear to be directed by the two of them communicating with each other.

"As for Kawhi, I have been assured very strongly that LeBron has not communicated with Kawhi, not only during this process but for a very long time. He has really not spoken to him and expressed a desire to play with each other."