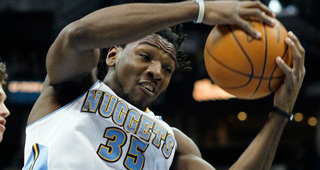 Kenneth Faried has been charged with unlawful possession of marijuana.

Faried was with two other men in a car stopped at a DWI sobriety checkpoint in Bridgehampton, New York, at about 1:30 a.m. and police said they detected "a strong odor of marijuana emanating from the vehicle."

The Nets acquired Faried in a July trade with the Denver Nuggets.