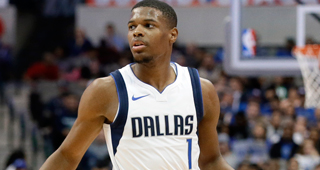 Smith's place with the Mavericks in the long-term is uncertain due to the presence of Luka Doncic.

The Phoenix Suns and Orlando Magic have been engaged with trade talks with the Mavericks.

Smith has missed the Mavs' past three games with a sore back.

Rick Carlisle and Smith have struggled to find a common ground. Smith has been pushed into an off ball role and Carlisle has been frustrated with the second-year guard's decision making.