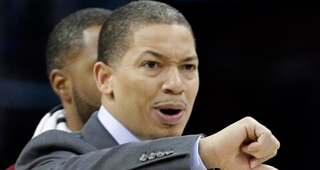 After Doc Rivers dismissed rumors of becoming the next head coach of the Los Angeles Lakers last week, the team has reportedly turned their interest towards Tyronn Lue.

Lue's previous relationship with LeBron James gives him a "significant advantage" over any other coaching candidate, according to Marc Stein.

Jason Kidd has also expressed interest in the job should the Lakers fire Luke Walton in the offseason.