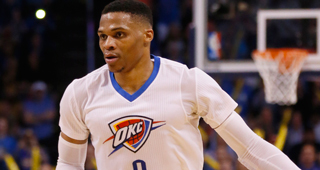 Russell Westbrook will average a triple-double for the 3rd straight season following the Oklahoma City Thunder's 123-110 win over the Detroit Pistons.

"Just blessed, brother. I can't even -- I do what I do every single night, regardless of what anybody says, what they call it, what they say. I'm just thankful to all the teammates in this locker room, teammates over the last couple years, they made my job easy. I just try to do what I can to impact the game in every facet. I've said that every year, and I stand by it," said Westbrook.

"I think the fact that he has done this three years in a row, people don't understand what has happened, in my opinion. And I'm shocked that they don't talk about it. And I know they're numbers, and I get all that stuff, but in terms of the historic part of the game, people are going to look back in time, and I think what he has done will be more appreciated later on than it is right now," said Donovan.