Jamal Murray On Blazers Matchup: 'I Love Competing Against Dame' 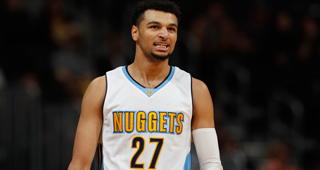 Jamal Murray spoke of his excitement on facing Damian Lillard in the Western Conference semifinals.

Murray scored 16 out of his 23 points in the second half of game 7 to eliminate the Spurs.

The Nuggets won 3 out of 4 games in the regular season against the Blazers.