Kyrie Irving Has Lakers On His Free Agent Board 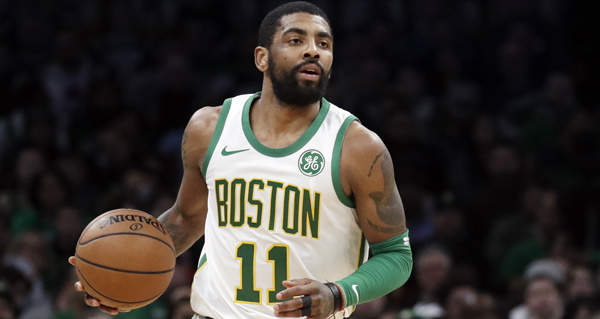 Brian Windhorst and Jackie MacMullan separately suggested there is a possibility of Kyrie Irving signing with the Los Angeles Lakers to reunite with LeBron James.

Irving requested a trade from the Cleveland Cavaliers in 2017 at least in part because he no longer wanted to play with James.

"As time passes here, I would have said this was impossible for many months," said Brian Windhorst. "But as time passes here and the possibility exists that Jason Kidd could be hired as the Lakers' coach, I think the possibility of Kyrie and LeBron reuniting is.. you know that door which was deadbolted has been un-deadbolted and is now cracked open.

"Definitely, no question. No question about that," replied Jackie MacMullan.

"Might even be opening more by the day. I just think it's on Kyrie's radar. It's on Kyrie's board. He has had discussions with people about playing for the Lakers. But as you said it's pretty difficult to read him.

"I asked him point-blank, Brian. I asked him this very question," said MacMullan.

"I said, 'you know what everybody's saying, Kyrie, they're saying now you're going to go back with LeBron'.

"And he laughed again and he put his arm around me and then he left. So determine that what you may. That was three weeks ago. Three or four weeks ago. So everything is in play with him right now."

Irving has also been linked with the New York Knicks and Brooklyn Nets, while re-signing with the Boston Celtics remains a distinct possibility as well.