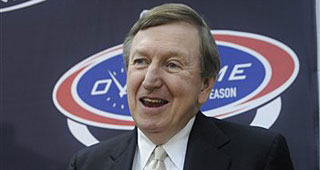 The Washington Wizards announced today that they have named Rod Thorn as senior advisor to the general manager.

Thorn, who brings over 40 years of NBA front office experience to the organization, will consult with Wizards General Manager Tommy Sheppard on decisions including personnel, free agency, draft and other basketball operations matters in this newly-created role.

“It is an honor to bring Rod aboard and to have all of us benefit from his vast amount of NBA knowledge and experience,” said Sheppard. “He has been one of the most influential people in the history of the game and will be a major asset to our organization in helping us develop a positive and winning culture.”

Thorn has served as general manager for the Chicago Bulls, New Jersey Nets and Philadelphia 76ers. While with the Bulls (where he worked with Mystics Head Coach/General Manager Mike Thibault), Thorn was responsible for drafting Michael Jordan. With the Nets, Thorn was named Executive of the Year following the 2001-02 season and built the team that appeared in consecutive NBA Finals in 2002 and 2003.