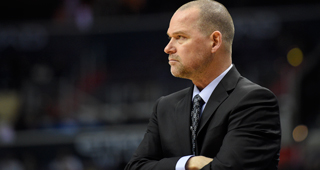 The Denver Nuggets and Michael Malone have agreed to a contract extension. Adrian Wojnarowski of ESPN reports the deal runs through 22-23.

Malone is coming off a season in which he led the Nuggets to a 54-28 record, their second-best overall record in franchise history, en route to the No. 2 seed in the Western Conference. The Nuggets also advanced to the second round of the NBA Playoffs for the first time since 2008-09. Since Malone took over prior to the 2015-16 season, the Nuggets have improved on their win total by a total of 24 wins (+3 after first season, +7 after second, +6 after third and +8 after fourth), making Denver the only team in the NBA to increase their win total in each of the last four seasons. The Nuggets previously agreed to a contract extension with Coach Malone on Oct. 17, 2018.

“This season and team has been about continuity, with Coach Malone being the first piece of that,” stated Josh Kroenke. “We are thrilled to continue to have him lead this promising young roster and are excited about what the future holds. Coach Malone has been pivotal in this organization’s success and will continue to be so.”

“We have been very fortunate to have Coach Malone lead our resurgence. His tireless work ethic and passion are clearly reflected in the continued improvement of our roster,” said Tim Connelly. “We are all extremely excited for him to continue to lead our team as we try to build a championship level organization.”