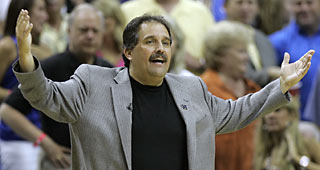 Stan Van Gundy is not interested in becoming head coach of the New York Knicks, suggesting his brother Jeff Van Gundy would be a better candidate for that specific job.

“I’m not interested in the New York Knicks. No,” Van Gundy said. “First of all, there’s a family history there. If anyone would be interested in that — and I’m not sure he is either — it would be my brother.”

Van Gundy went on to suggest he believes the Knicks also aren't a fit for him due to problems he perceives within the franchise.

“And I just – I’ve said this – I’m different than a lot of coaches in looking at jobs. To me, it’s all who you work for and you work with,” said Van Gundy. “Everything I’ve seen in the last few years with that organization says that it’s extremely dysfunctional.”

Van Gundy, however, would be interested in the Brooklyn Nets' job.

“Of the two the Nets are the better job. There’s no question about that right now,” Van Gundy said. “The organization has been more stable. They’ve won more games. They have more talent.”