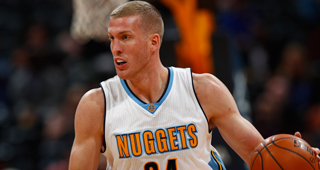 Mason Plumlee expressed his optimism that the NBA season will resume in an interview with Mike Singer of the Denver Post.

“People are very optimistic that we’ll start the season again. There have been a lot of proposals thrown around. … From the union meetings, I’ve learned that there are developing plans and strategies to bring the season back," said Plumlee, who is the Nuggets alternate union rep.

Plumlee said he's heard several different proposals pertaining to the logistics of finishing out the season, including creating a quarantined area in Las Vegas or at Disney World.

“People know that we’re playing for the TV at this point. It’s unrealistic to expect any kind of attendance. I know that they’ve talked about cutting down the travel party. I’ve heard proposals of one city, two cities, three cities with 10 teams, an expedited finish to the season or a differentiated version of the playoffs," said Plumlee.

Plumlee added that players were pushing for two-to-four weeks of a ramp-up period before restarting the season.