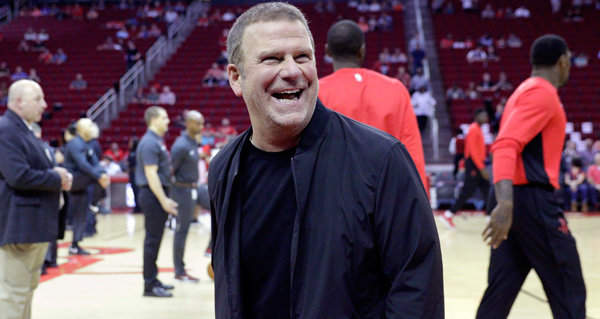 During a roundtable discussion with restaurant executives and industry leaders at the White House, Tilman Fertitta was questioned about the possibility of the NBA resuming its season by President Donald Trump.

"I think what they're doing is waiting to see what happens in certain states and if we're going to be able to play," Fertitta said when Trump asked what would happen with basketball, meaning the NBA. "Making sure the virus continues to go in the right direction in the next few weeks. And I think that if things are going in the way that it's going, I think the NBA, the commissioner Adam Silver, who has done an unbelievable job through this, and the 30 owners will make the decision to try to start the season up again."

Trump followed up with a more direct question: "Will you finish the season or not?"

"I think that there's talk about finishing the season playing X number of games," Fertitta said. "The players need to play to get paid, and right now they're taking a 25% pay cut. They own 50% of our revenue, unlike the other sports. And so they want that revenue, even if it's not the people-in-the-stands revenue, so they can get paid."

Trump then asked if the NBA will resume the regular season or immediately begin the playoffs.

"I think that we would play some games just to get it going again and create interest and then go right into the playoffs," Fertitta said. "But I think it'll be great for America. We're all missing sports and everybody wants to see these great NBA teams."