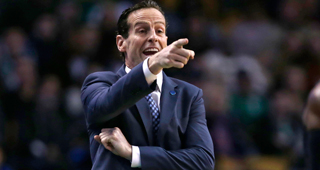 The New York Knicks are expected to interview Tom Thibodeau, Kenny Atkinson and Mike Miller for their head coaching vacancy.

Thibodeau is widely considered to be the top candidate for the job.

Atkinson was fired as head coach of the Brooklyn Nets in March.

The Knicks have been impressed by the job Miller has done as interim head coach and is expected to be offered a position to stay with the franchise even if he's not offered the head coaching job.