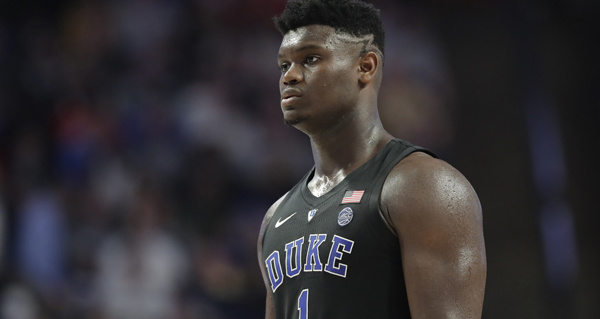 The stepfather of Zion Williamson allegedly solicited and accepted a $400,000 payment from a marketing agent in October 2018, per a court motion and sworn affidavit filed by his former marketing representative's attorneys in federal court on Thursday.

Gina Ford's attorneys say the affidavit and other exhibits show that Williamson was ineligible when he played for Duke in 18-19 after his stepfather, Lee Anderson, received impermissible benefits from Slavko Duric, a Canadian marketing agent.

"[We] obtained newly discovered evidence impacting the issue of whether Zion Williamson was a 'student-athlete' that we believe makes it transparently clear, verifiable and indisputable that he was not a 'student-athlete' long before there was any communication or contact between Zion Williamson, and/or any third party acting on his behalf, and our clients," Ford's attorney, Alvin Pittman, wrote in a letter to Williamson's attorney on Monday.

"The alleged 'agreements' and driver's license attached to these papers are fraudulent, and neither Mr. Williamson nor his family know these individuals nor had any dealings with them," Williamson's attorney, Jeffrey Klein, said in a statement to ESPN. "We had previously alerted Ms. Ford's lawyers to both this fact and that we had previously reported the documents to law enforcement as forgeries, but they chose to go ahead with another frivolous filing anyway. This is a desperate and irresponsible attempt to smear Mr. Williamson at the very time he has the opportunity to live his dream of playing professional basketball."

Klein said in a letter to Pittman that a Google search revealed that Duric "purportedly attempted to defraud [Dallas Mavericks player] Luka Doncic ... using a scheme in which he forged Doncic's and his mother's signatures on a contract."